Did your ancestor serve in WW1 or WW2?

Uttoxeter Town Council is looking for a student who is a descendant or relative of a serviceman named on the town’s War Memorial.  We’d like to invite them to read a poem at the dedication service for the new plaques being placed on the memorial.  This takes place on April 25th in the morning.  If you think you can help us with this please let Mrs Rudge know as soon as possible.
Alison Trenery, Uttoxeter Mayor

Tuesday is a whole Y11 assembly led by the National Citizen Service (NCS).  This will give students a further opportunity to sign up for the tremendous opportunity offered this summer by NCS
Due to the House Drama rehearsals and performances there are no assemblies on Wednesday or Thursday
Thought for the Week
May the message of hope that Easter brings, give us support in times of need.  May the Easter message of loving sacrifice tead us to love others without counting the cost to ourselves

Dates for your diary

The House assemblies this week were compelling.
It is a testament to our sixth form students, who led the assemblies, that they were successful in compassionately and creatively reminding us of the importance of learning from the actions of the past. I would like to thank them for such a thought provoking piece. They are so committed to sharing their message that they will be visiting our middle schools in the coming weeks.
I also had the pleasure of seeing over 50 students take part in a piano master class on Wednesday. Those involved, showed courage and ambition as they were individually and publically  coached on their technique.
Finally thank you to all parents who supported year 9 and 10 parents evenings.

Tash Young and Jack Golicki, are running an Easter raffle in aid of the sixth form charity  prizes are hampers of Easter eggs, 25p a ticket or £1 a strip of 5. Please support them if you can.

The final preparations for the year book are going well, see the images below for a sneak preview.

The next round of GCSE+ starts straight after the Easter break for Year Eleven pupils.  This time the focus will be predominately on English, Maths and Science, with pupils spending 20 minutes every morning working with specialist subject teachers. 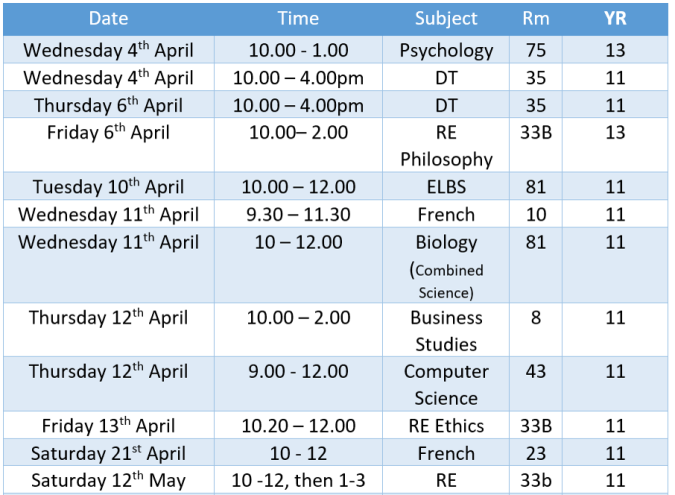 Changes to the marking of exam coursework/controlled assessment in accordance with JCQ regulations, will be found on the school website (Policies) from Easter.

U15 County Rugby 7’s
On Tuesday we travelled to St Jo’s in Trent Vale for the county finals to take on the best 15 teams in the county.  We were drawn in a tough pool with our first game against the home team who are a selective school who award places based on rugby ability.  St Jo’s started with a bang scoring from the kick off and we were unable to recover losing by 4 tries to nil.  The second game saw an even contest against Westwood from Leek. Errors allowed Westwood to take a 2 try lead before Charlie Martin scored a length of the field try, Alleyne’s had the chance to draw the game with the last play but knocked on with the line beconing.  This left Alleynes the task of winning their remaining 2 pool games to go through to the next stage.  We got a win on the board in the next game over a strong Walsall Academy side. Alleyne’s used their squad well and won a tense game against St John Fisher which was sparked by a length of the field try saving chase by Charlie Cope, which Alleyne’s then counter attacked to score through captain Ben Simon.  This result saw us qualify for the bowl semi-finals and were srawn against Blysthe Bridge.  This proved to be a miss match as Alleyne’s racked up a huge score, which allowed us to rest players for the final.  The final saw a convincing win over a tired Graham Balfour side with the final score 48-0.
All the 12 man squad contributed to a great day of Rugby.  Captain Ben Simon led the team well with 2 tries and a number of drop goal conversions.  Joel Grout was at his creative best and was back to full fitness finishing 2 tries and kicking 8 goals.  Up from Lewis Brown and Ed Fradley set a great platform, Gregor Hayes decided to show us he could play every position on the field and kicking 2 conversions., Will Bowyer refused to come off until he had scored a try which he did despite having to remove his lucky earing. Louie Thornton put in the biggest hits of the day and got himself on the scoresheet in the final. George Hill showed great Athleticism out wide to score 3 tries, Max Hunt scored 3 well taken tries in front of his uncle and then managed to make  a supporter cry with a miss judged kick.  Charlie Cope made good contributions in attack and defence when on the field. Charlie Martin probably had the performance of the day scoring 9 tries with some blistering pace and Jenson Bosworth looked after the Jewellery safely after forgetting his gum shield. 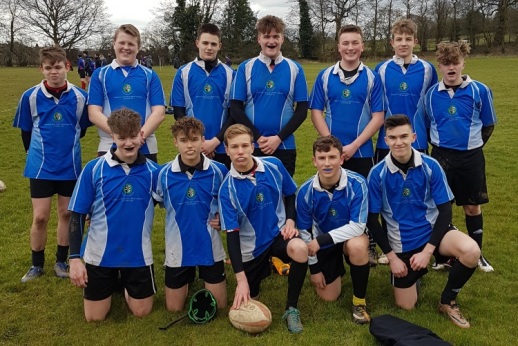 GCSE PE
Reminder all GCSE practical videos and assessments need submitting before Easter.  Students taking handball on Tuesday have been sent coaching videos on Insight which we advise them to watch.  GCSE revision guides are still available to buy at Thomas Alleyne’s online shop.
Cheerleading
Cheerleading club is still going strong with the girls learning even harder skills than before, they’re not perfect, yet, but we are certainly getting there. The club isn’t on next week but will return after Easter if anyone wants to join us. 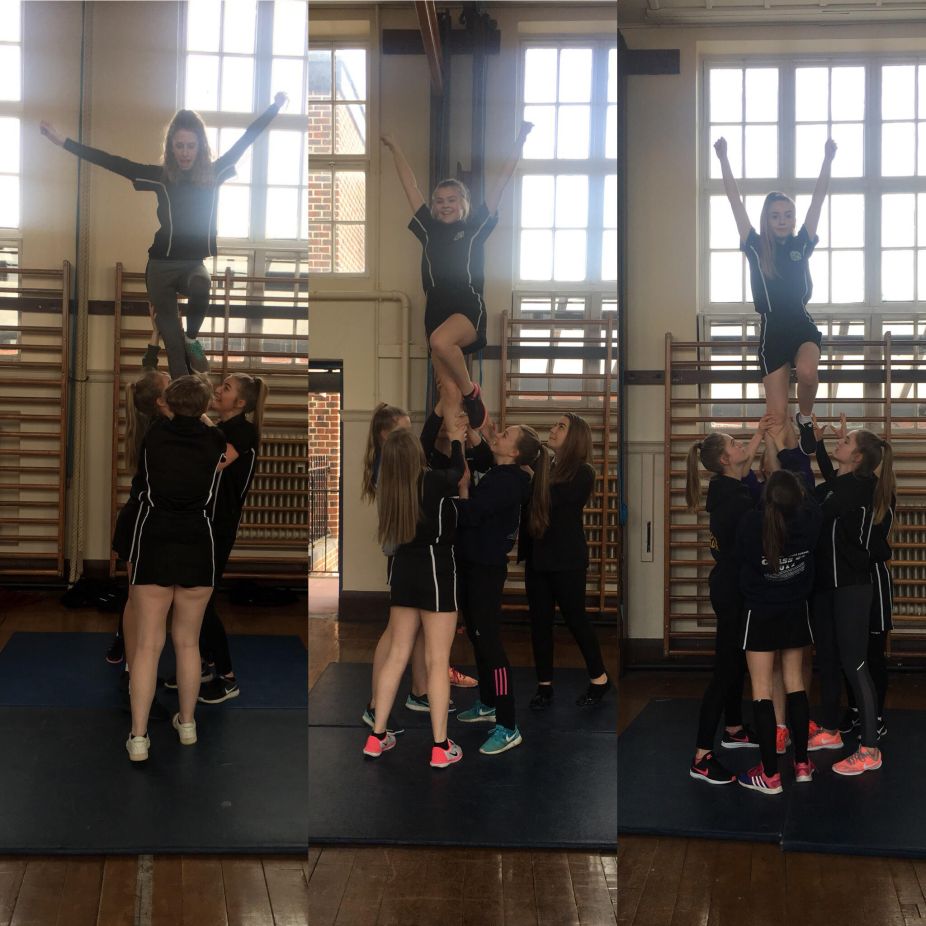 The Staffordshire Indoor cricket tournament took place at Fenton Manor on Thursday. Lucy Carr, Lottie Cooper, Sam Cotterill, Katie Hartley, Eve Bednall, Holly Chatfield, Amelia & Freya Hadgett were selected to represent Thomas Alleyne’s.
The tournament started with two narrow defeats to Denstone A & Abbotsholme, there were some notable strong performances from Lucy Carr who retired from both innings not out. Next up were Painsley, TAHS shared the bowling out between 7 players and
wickets fell quite regularly, with a tight field. Lottie, Lucy & Katie were dominant with the bat to record the first win by 11 runs. Eve, Sam, & Katie were disciplined with their bowling taking wickets and conceding very few extras. Amelia and Freya both showing good agility in the field.
Last up were Newcastle – Under- Lyme School who batted first, again all fielders bar bar wicket keeper Holly bowled an offer & 7 wickets were taken by the 7th. Many of the shots played by Newcastle went straight to Lottie who took 2 catches and a run -out.
Katie & Lucy soon met the total with the bat for a second victory by 6 wickets.
The competition is a promising start to the season, anybody who is interested please attend girls cricket practice after school on a Friday.

Following on from last week’s British Science Week activities, we have continued to celebrate all aspects of Science with a Geoscience talk to our Year 9 students given by Mrs Gouldsmith.  The students had the opportunity to look at a display of rocks, minerals and fossils and heard accounts of how Earth’s formation and ancient climate can be gleaned from the evidence in the rocks.  The 4.6 billion year old piece of meteorite was of particular interest to students; when they considered that it is the oldest thing they will ever hold in their hand!

This week’s Science Students of the Week selected by Mrs Faizey are:

Molly Bettson and Matthew Jackson for excellent effort at all times

James Lomas for scoring above target in a recent chemistry assessment

Oliver Stainsby for working very hard in all science lessons 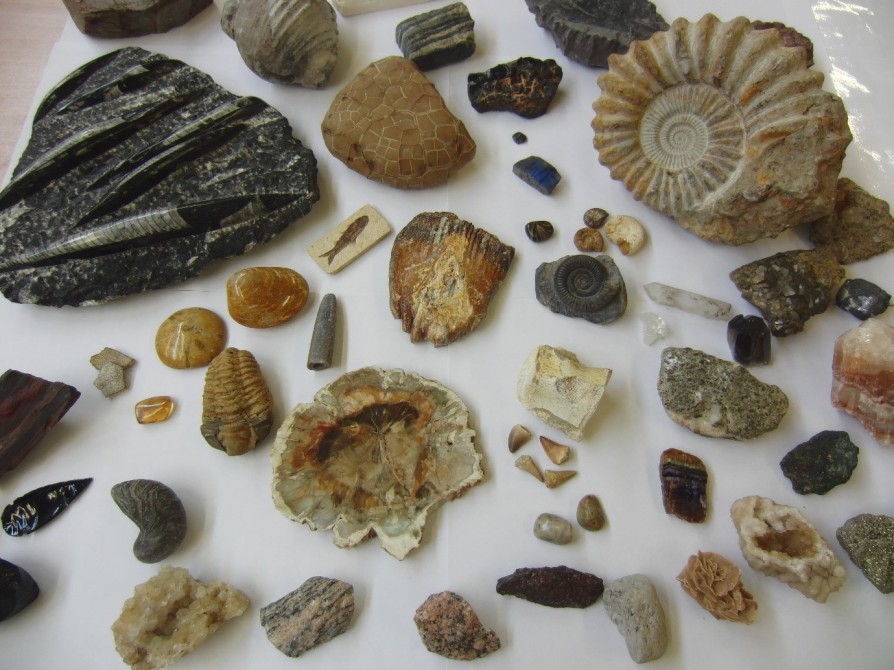 Details of his work are available on the website link where you can see performances and links to his scholarship work with students he selects from all over the country. This was a fantastic opportunity for not only the 8 piano students I selected for him to listen to but for the audience of budding pianists and musicians who were lucky enough to hear his 90 minute masterclass. He stunned the audience with his performance of Khachaturian’s Piano Sonata in F given on our very own Ibach Grand Piano in the theatre and then went on to coach our selected piano pupils of: Robert Fuller, Natasha Painter, Bradley Rolph, Lily Bekker, Hannah Quirke, Rachel Clemett, Sarah Page and Lucy Vickers.  His method of teaching challenged the pupils and promoted deep independent thinking. Resilience was needed to take the feedback on board but all pupils were brave and responded brilliantly. I would like to thank Richard for this opportunity and he has promised to return in the future to follow up the progress of the students.

Lilly Bekker and Bradley Rolph, two of our GCSE music students, wrote this report about their experience:

This week, Richard Meyrick, a concert pianist, visited our school to educate 8 amateur pianists, whilst entertaining a group of music students from our school. To begin the masterclass, he performed a five minute piece which impressed all of us. The advice he gave us was thorough and helpful and gave us an insight into a professional musician’s level of talent. We are very grateful for this opportunity and thank Mrs Todd for arranging it.

MANY THANKS FROM ELLIE ROOBOTTOM FOR YOUR SUPPORT OF HER BAKE SALE ON MONDAY. SHE RAISED £164 TOWARDS THE FUND THEY HAVE SET UP TO HELP SEND HER BROTHER,WILL ROOBOTTOM, TO SRI LANKA WITH THE BRITISH LIONS INDOOR CRICKET TEAM.

Pastoral students of the week:

Don’t forget to check out the new careers page on tahsroundup.wordpress.com

This week information on:

A catering apprenticeship here at TAHS